I used to want to be a zoo keeper or owner because I love animals. But after watching documentaries and people telling me, I finally realised that it is worse for the animals to be there. They are being held captive and even though you are presenting them to the public, they aren’t meant to be there. My views have completely changed and I thought that what I wanted was to have all these animals all in one place so that everyone can share the happiness. But it’s the selfishness of humans, wanting things for themselves, where we can’t see what is best for anything else including these animals.

It is such a normal thing to have zoo everywhere. Theres about 50 zoos just in the UK, and this is not including safari parks, which is slightly different. What they do there is a lot better considering they give the animals much larger areas where they can roam around. Of course this is still nothing compared to in the wild, but it is a small step in the right direction. But because they are so normal, it’s not something that is going to be declining anytime soon.

This summer, I went to 2 zoos, Edinburgh Zoo and London Zoo. These were 2 of the most popular ones in the UK and it just so happens that I was in those areas which made me really want to go to them. They ended up being a great experience and I didn’t think for a second about the encasement. I was thinking, it was one of the best experiences seeing a Panda! But on the other hand, I would love to see one who was treated well or even be a panda hugger which is apparently a job in China. Dream job right there. Or even the stunts for entertainment. Just like in the documentary Black Fish, the trainers taught the whales to do tricks and fed them with fish to congratulate them on what they did. 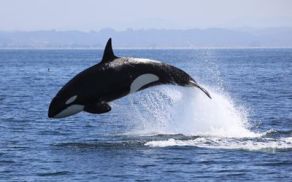 And this happens quite a lot, but animals like whales, aren’t meant to be ride by humans.

And in the documentary, scientists even mention how they will all eventually lash out because they aren’t supposed to be there, and they get fed up.

Not to mention, the recent law update that animals don’t have feelings? I don’t even understand where they got that information from or what they were thinking. It is so ridiculous, we are all mammals and all have emotions. Some animals such as whales, more emotions than we do based on the research on their brain. It explains their behaviours and the government clearly have not given that any consideration. And again, of course, humans care more about themselves than anything else.

I watched Lilo and Stitch recently, and this probably sounds like it can’t relate to any of this what-so-ever, but Lilo is a human and Stitch is a new creature from another planet. Lil and her family have a saying, ‘ Ohana mean family. Family means none gets left behind or forgotten.’ Lilo brings Stitch in to the family despite what he is and see’s the good in him. Why can’t everyone be like her? She’s only a little girl and yet she has a bigger heart than most people on this earth. Not to be review like but I watched the second and third movie, and I loved it so much, and shed a slight tear.

Zoo’s are just a partial example of how we treat animals. You see people just leave their pets not he street just because they cannot be bothered to look after them anymore. The amount of animals in shelters because they have bad owners is not okay. Surely we should love them as much as we love our own family. We as humans, are the reasons for a lot of animals going extinct. And because there are so many different living organisms, we don’t think about all the ones dying out.

Some of my favourite movies are about zoo’s including, “We Bought a Zoo”. This shows how much they care for the animals and I fell like this sparked a love for zoo even more. Because people like that, aren’t just in it for the money like most businesses, and it’s a sad reality, just like a lot of movies portray.

But we can all make our own opinion.

My name is Fiona, I'm 21 years old and I write about lifestyle, DIY and movies. I am an animal lover trying to live a more sustainable lifestyle, and pursuing a media career to create a better world. View all posts by cl0ud_eighteen